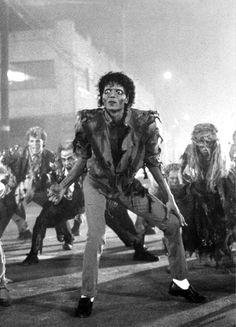 In honour of Halloween, this October instead of my weekly Sunday Sofa Sojourns posts I will list a few of my favourite creepy things. I’ve written about horror graphic novels and kids’ books.

Music videos usually clock in at four to six minutes on average.

Artists have only that short period of time to make something memorable, of course never forgetting that the audio is the real star of the show. By definition, the visuals play second fiddle to the music. That doesn’t equate to boring – clearly there are many examples of music videos becoming as recognisable as the songs they accompany (think A-ha’s ‘Take On Me,’ or Queen’s ‘Bohemian Rhapsody,’ to name a few). The creativity involved in integrating both pieces of content makes music videos fascinating to watch for me.

Even better, with YouTube everyone now has the luxury to watch their favourite videos whenever they want. Hands up who remembers sitting around in front of the TV – be it MTV, Channel V, or Myx – waiting just to catch a glimpse of theirs?

First things first: ‘Thriller’ isn’t on this list. (Not a hater here: that dance scene in ‘13 Going on 30’ is a personal guilty pleasure to watch.) While Michael Jackson’s video is certainly iconic, there’s something about the dancing undead that just didn’t scream “scary” to me.

Second, I haven’t included anything from Marilyn Manson, Aphex Twin, or anything like that – though some of their videos fall well within the nightmare fuel category. I have nothing against these musicians, I just chose from the universe of music I actually listen to.

Finally, all of the music videos on my personal short list are not shit-your-pants scary. But I vividly remember the first time I saw each of them and all settled uneasily on my mind. Clearly, there they still linger. Here goes.

Show me a ‘90s kid who didn’t get creeped out by the bug-eyed ever-widening grins of the suburban townspeople in Soundgarden’s music video for Black Hole Sun.

Throw in other Twin Peaks-esque imagery: an eclectic band of doomsayers, that elderly lady applying lipstick while simultaneously ogling a muscled man and exercising with a vibrating belt, and a Barbie melting on the barbecue, and you’ve got yourself one terrified kid.

In The Prodigy’s Breathe the imagery is less subtle and more in-your-face: close-ups of roaches in a dirty sink, millipedes, a loose alligator. Actually, I found the duelling shots of Keith Flint and Maxim more disturbing. It’s probably all those flashing lights.

But man, what a sick beat. I only recently realised I’ve been singing it wrong for over two decades (it’s not “Psychosomatic-atic insane” haha).

I don’t know what I was on when I first saw this video, but it didn’t immediately register that I was watching MTV. I thought I was watching some Blair Witch-type illegal Russian documentary. Also, bear in mind that while nowadays zombies are old hat thanks to shows like The Walking Dead, in 2008 they weren’t as commonplace.

In short, the video scared me for a good eight minutes. Also how chilling is that line, “Hunt you down without mercy / Hunt you down all nightmare long”?

I listened to a lot of Radiohead back in the day when I was an angsty teen haha. I only came across this track recently (I didn’t know they were still active!). I have to include it here because I like how cleverly it merges imagery from The Wicker Man with innocuous stop-motion animation reminiscent of Postman Pat.

Could have been creepier without the scene at the end, though.

As always, I hope you enjoyed this short, musical list. Till next week! 👻

Because I’ve been in A Mood lately, I’ve resurrected an old Spotify playlist I made of all the sad songs I could think of.

I chucked everything but the kitchen sink in there, so my playlist ranges from ’80s power ballads (I distinctly remember when I was in preschool crying on the school bus every time I heard Roxette’s ‘It Must Have Been Love’ on Manong’s radio — opo, every time), OPM songs that vividly remind me of my real-life break-ups (Sugarfree’s ‘Kwarto’ — each line was on point, even the dusty jacket in the corner), to indie (‘Your Ex-Lover is Dead’ from Stars is a favourite… “And all of the time you thought I was sad / I was trying to remember your name” …*mic drop*).

Anyway. I’ve been listening to this playlist a lot recently. It got me thinking about what the saddest song ever written could be.

My gloomy playlist certainly had a lot of promising candidates. Who would win the Saddest Song award? Joni Mitchell’s ‘River’ (“I wish I had a river I could skate away on” always gets to me)? Would it be Abba’s heart-rending entry, ‘The Winner Takes It All’? Adele’s painful, plaintive request in ‘All I Ask’? How about Alanis Morissette’s ‘So Unsexy’ (to anxious people like me, this song always struck far too close to heart)? (As you can see, I got stuck on letter A.)

Then my random playlist shuffle landed on ‘A Letter To Elise’ from The Cure.

Don’t get put off by Robert Smith’s goth look and crazy hair. Have a listen with your eyes closed.

From me and you, there are worlds to part
With aching looks and breaking hearts
And all the prayers your hands can make
Oh, I just take as much as you can throw
And then throw it all away
Oh I’ll throw it all away
Like throwing faces at the sky
Like throwing arms round yesterday
I stood and stared
Wide-eyed in front of you
And the face I saw looked back the way I wanted to
But I just can’t hold my tears away the way you do
Elise, believe I never wanted this
I thought this time I’d keep all of my promises
I thought you were the girl I always dreamed about
But I let the dream go
And the promises broke, the make-believe ran out

The quiet, aching resignation in those lines. Hay.

How about you? What’s your go-to sad song?

I’m a bit of a mixed bag when it comes to my favourite music.

My philosophy on music – as with life, in general – is that it’s worth trying anything at least once.

A quick look at my Spotify playlists shows it runs the gamut from The Beatles to the Backstreet Boys, Diana Ross to Death Cab for Cutie, Nancy Sinatra to The National, Wilson Phillips to Weezer, Pare Ko to Part of Your World. I love them all.

(Side rant: one of my pet peeves is people who dismiss whole genres or artists just because it’s “mainstream” or “pop” or from Nickelback or whatever. What does that even mean, anyway?

Music is a deeply personal experience. Just because a person’s musical taste doesn’t conform to our particular idea of what’s “cool” is no reason to dismiss her/him or the music altogether. We’ve all stopped being anxious high schoolers long ago – by now, if you’re still judging people by whether they’re a Belieber or not then you’re the a-hole. Everyone is unique. If we all listened to the same songs the world would be a much more boring place. Ok, rant over.)

I recently came across an old NY Times article written by Seth Stephens-Davidowitz called “The Songs That Bind.” By crunching Spotify data on how frequently every song is listened to by men and women of each particular age, Seth came to a fascinating conclusion: the majority of us, when we are grown men and women, predictably stick with the music that captured us in the earliest phase of our adolescence.

That’s right – the songs we were listening to as our voices cracked and our hair grew in strange places are most likely still going to be our favourites when we’re in our 30s or 50s. More specifically, these are the songs we liked at the ages of 11 to 14 (for women) and the ages of 13 to 16 (for men).

In my case, this seems to be true. I have a soft spot for a lot of ‘90s era pop and alternative music. I can still belt out, word for word, the lines to nearly all the songs from the Disney Renaissance movies. The lyrics from the tracks on the early Now That’s What I Call Music! albums are forever etched on my subconscious, it seems.

Interestingly, I also realised I still listen to a lot of the songs I was exposed to at that age – not necessarily from the ‘90s. I’m talking about the music my parents listened to. They controlled the car radio and what played on our home stereo on lazy weekends – which meant a diet of Billy Joel, The Jackson 5, Jose Mari Chan, and ABBA. The Manhattan Transfer, Simon & Garfunkel, Phil Collins, and Air Supply were staples. The Sleepless in Seattle soundtrack was a family favourite (“Give me a kiss to build a dream on and my imagination will thrive upon that kiss…”).

One of my continuing favourites from my parents’ playlist is the Carpenters.

They had a song for almost every occasion. Slow start to the week? Rainy Days and Mondays. Your boy ghosted you? Please Mr. Postman. Imminent alien invasion? Calling Occupants of Interplanetary Craft.

I remember dedicating – privately, in my diary haha – the Carpenters’ ‘Goodbye to Love’ to an unrequited crush (opo, ma-drama na po ako since nineteen kopong-kopong). Karen Carpenter’s smooth vocals and the sweet innocence in some of their ballads contrasted with the tragedy of her early death, and lent some of the songs a haunting quality.

Suffice it to say, I was already a bit of a Carpenters fan. I was pleasantly surprised then, to come across the 1994 tribute album If I Were a Carpenter on Spotify.

I was already familiar with Sonic Youth’s emotionally charged version of ‘Superstar’ from the movie Juno (another awesome film soundtrack btw). I dug around and found it actually came from If I Were a Carpenter, a whole album of ‘90s alternative rock bands covering the Carpenters’ hits.

Apart from Superstar, my favourites include Dishwalla’s cover of ‘It’s Going to Take Some Time’ (it put me in a very ’90s mood), Shonen Knife’s ‘Top Of The World’ (had a joyful Ramones sound to it which I liked), and The Cranberries’ rendition of ‘(They Long To Be) Close To You’ (mainly because I like Dolores O’Riordan’s voice haha).

It’s especially tricky for tribute albums to get the formula right (*ehem* a certain Eraserheads tribute). They can’t just sing the song as is, otherwise it’s no different to a ho-hum karaoke version (at best) or a poor copy of the original (at worst). They can’t render it too unrecognisable either, because they’ll leave the original band’s fans disappointed.

I felt that If I Were a Carpenter hit all the right buttons – it was a fresh take on songs I loved, with the distinct vibe of the era I grew up in. What a trip down memory lane. The feeling is best captured in the Carpenters’ own words:

All my best memories come back clearly to me

Some can even make me cry, just like before

How about you, what’s your favourite music? Has it changed since you were younger? Let me know in the comments!

© pinaymamasg.com, 2020-2022. Unauthorized use and/or duplication of this material without express and written permission from this site’s author and/or owner is strictly prohibited. Excerpts and links may be used, provided that full and clear credit is given to pinaymamasg.com with appropriate and specific direction to the original content.